Psychology accurately distinguishes the truth from falsehoods in sex crimes

The media reports that The US Senate has received an FBI report on sexual misconduct allegations against Supreme Court nominee, Brett Kavanaugh, but the controversy continues over who was lying, and who was telling the truth.

Professor Christine Blasey Ford had testified to the Senate Judiciary Committee that Mr Kavanaugh and another man assaulted her in the 1980’s when they were teenagers. 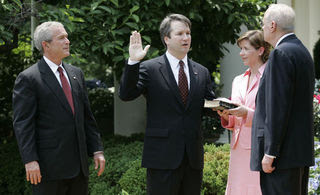 Thursday, June 1, 2006, in the Rose Garden Brett Kavanaugh sworn in to the U.S. Court of Appeals for the District of Columbia
Source: White House photo by Eric Draper

Professor Christine Blasey Ford’s and Brett Kavanaugh’s emotional testimony have both come under intense scrutiny; how believable she or he appeared may determine how the public decide what really happened.

Psychologists currently approach the question of who is telling the truth in these predicaments of sexual assault and rape, in a very different and surprising manner to the public, and even senior legislators.

The technique has recently been shown by the latest research to improve the ability to distinguish truth-tellers from fabricators in the arena of sexual assault.

False allegations, particularly if undetected as such, generate distress to victims and destroys lives, including unwarranted imprisonment, yet also raise unnecessary suspicion towards true rape victims.

André De Zutter a Professor at the Faculty of Law at Vrije University in Amsterdam, has pioneered a novel approach which is called, ‘The theory of fabricated rape’. The technique relies on a more scientific approach to sexual assault allegations than relying on our instinctive reaction to testimony.

André De Zutter in his latest research cites the example in the case of Gary Dotson (the first DNA exoneree in the USA); a victim of a false allegation made by Kathleen Crowell Webb, spending 10 years in and out of prison as a consequence. Webb’s was such powerful testimony that even when she later recanted her allegation and confessed the truth, not everyone believed that the rape had never occurred. It was not until the advent of adequate DNA testing that Gary Dotson was fully vindicated

But what about cases where DNA evidence cannot determine the issue, as with Brett Kavanaugh and Christine Blasey Ford, where it ends up, as it often does, as one person’s word against another’s? Is there still a way of getting at the truth?

Professor André De Zutter and his colleagues argue that a false complainant of rape or sexual assault, who has not been assaulted, has to fabricate a story, yet the account of a true victim is based on recollections of an actual event.

As false complainants are lying then their stories will diverge in a patterned and reliable way from the accounts of true victims, so forensic scientists who have compared false testimony with true ones, will be able to spot these differences. 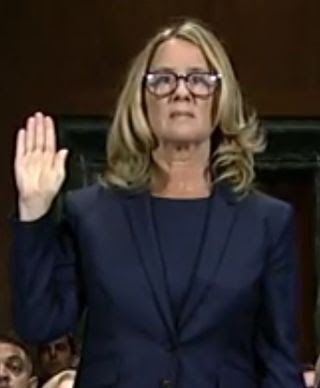 Palo Alto University professor Christine Blasey Ford rises to give an oath prior to her opening statement
Source: This United States Congress image is in the public domain

Fabricators will also construct a narrative based on their own sexual experiences, and if these do not resemble rape or assault, then the fabricated version will exhibit detectable differences, compared to a true story of rape.

Deceivers will also construct a story based on their beliefs concerning rape. If the beliefs false complainants hold about rape are incorrect, then an invalid account of rape will emerge.

André De Zutter, Robert Horselenberg and Peter J. van Koppen, the authors of the latest study based on this new theory, published in the Journal of Police and Criminal Psychology, contend their it is possible to discriminate to a considerable extent between true and false allegations of rape.

For example, a common strategy of liars is to keep the story simple and without details, so false complainants of rape or sexual assault, will probably adopt the same approach and construct a more concise or abbreviated general story.

Previous research has established that a false complainant tends not to give an estimate of the duration of the rape, nor describes how she and the rapist became undressed. It has also been found that true stories contained significantly more utterances by the sexual or rapist offender, than false accounts.

Researchers who studied rapists’ or victims’ accounts of rape found that if violence is used, it is goal-oriented so once the goal is reached, the violence stops. Violence in the context of rape is aggression that is needed to control the victim. Excessive levels of physical brutality are actually therefore rare during a rape as opposed to before or after.

During a rape, the victim is more concerned with survival and submits to the attack with little resistance, while in false allegations, the levels of violence and resistance described by the complainants tend to be much higher.

Another way of distinguishing fabricators from truth-tellers comes from the way rape and sexual assault is reported by news media. Media reports will tend to underpin rape beliefs held by the lay-public and this will therefore emerge as a detectable difference between true as opposed to false accounts.

Portrayals of rape in the media are consistently atypical and general. As a consequence, an idea about what sexual assault is arises in the public domain and in the mind of lay people that does not correspond with the reality.

Lay people tend not to believe that pseudo-intimate behaviour is exhibited by rapists.

One study found that jurors believed that an allegation of rape was false when the rape was preceded by kissing. Jurors become especially skeptical that an assault has occurred where the kissing was requested by the rapist and consented to by the victim. Jurors believe that rapists would not be seeking a kiss if they intended to rape someone.

In the very latest study on the ‘Theory of Fabricated Rape’, entitled ‘Detecting the True Nature of Allegations of Rape’, a police sample of true and false allegations was studied. A total of 72 true and 57 false allegations of rape were investigated, and using ‘The theory of fabricated rape’ incidents were blindly categorised into true or false. ‘The theory of fabricated rape model’ was able to predict the true nature of the majority of allegations with an accuracy rate of 91 %.

The scientific psychological approach could help the public and the Senate Judiciary Committee, who questioned Professor Christine Blasey Ford and Brett Kavanaugh, to make a better decision, less influenced by prior political or gender prejudices.

Psychological research has established that cases like these tend to be decided by us, where we think we are being open-minded, but in fact we have often already made up our minds using prior biases and prejudgments about men and women and sex.

This blog post was written by by Dr Raj Persaud Consultant Psychiatrist and Dr Helinä Häkkänen-Nyholm, Forensic Psychologist, adjunct professor and the CEO of the psychology and law firm PsyJuridica Ltd. Dr Peter Bruggen the usual co-author of this blog has sadly passed away in September 2018, he led a long and productive life and will be sorely missed.