Getting Your Head Around the Psychology of Trump’s Wall

Does psychology help explain barriers between the two sides of the wall debate?

Walls, barriers, borders, and boundaries all serve strong emotional functions deep in our psyche, which may explain why they arouse such passion.

Whether President Trump will eventually get his border wall, or how much of it he already has, diverts attention

away from the fact that one of the most significant recent transformations of the United States landscape is the rapid expansion of gated communities.

In other words, the wall might be arriving via the back door.

Maybe the president’s clever psychological appeal to the electorate has tapped into a growing need many already feel to be surrounded by ramparts. 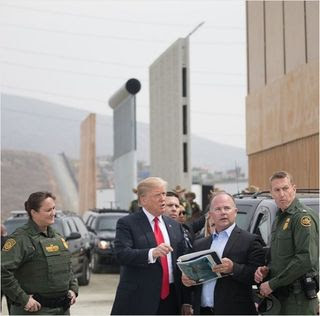 Evidence that we live in world increasingly divided by fortifications comes from investigations such as a study and chapter entitled Gated Communities and Crime in the United States, published in the Oxford Handbook of Environmental Criminology, from Oxford University Press. This investigation from the University of California, Irvine, points out that gated communities are increasingly popular across the U.S.

A nationally representative sample from the 2001 American Housing Survey (AHS) reported more than 7 million “walled and fenced” communities, representing 5.9% of the sample, with over 16 million people living inside such communities.

The authors of the study, Nicholas Branic and Professor Charis Kubrin, argue that continuing strong consumer demand for homes inside stockades means that the current number of gated communities has increased dramatically from earlier estimates. They are especially common in the Sun Belt region, which includes states such as Arizona, California, Florida, and Texas, yet gated communities are also emerging as a worldwide phenomenon.

Such “fortress building,” the study’s authors argue, appears to arise from fears of crime and victimization, expecting that gates and walls will provide security and safety.

Fear of “others” appears to be a key driver, which translates into what has been termed “white flight” from having to live near immigrants or members of minority groups. Gated communities also represent homogeneity: Residents’ demographics tend to be much more similar than different, so, psychologically as well as physically, walls distinguish between ‘us’ and ‘them.’

Branic and Kubrin found in their research that gated community blocks were associated with 42.4 percent fewer violent crimes and a 22.8 percent reduction in property crimes, compared to blocks not designated as gated communities.

This would appear to be evidence that walls may not be such a bad thing: It’s no accident they help people feel safer.

Opponents of the building of walls are going to have to answer the conundrum of how to make people feel psychologically safer in the face of such powerful fears.

But just before you throw your support behind any wall dividing you from Mexico, you should perhaps also consider another important study, “Exploring the Connection between Immigration and Violent Crime Rates in U.S. Cities, 1980–2000.”

This study, by Kubrin and Graham C. Ousey of the College of William & Mary, points out that surveys repeatedly find that the foreign-born commit considerably fewer crimes than the native born. Empirical studies continue to find that crime, arrest, and incarceration levels are lower among immigrants.

This study, published in the academic journal Social Problems, also points out that surveys repeatedly find that the children of immigrants who are born in the United States exhibit much higher crime rates than their parents: The process of “Americanization” involves increased crime and incarceration levels.

The authors of this investigation also point out that Latinos being heavily involved in drug trafficking and its concomitant violence is a common perception. This stereotype is both reflected in, and reinforced by, blockbuster Hollywood films such as Scarface. But the actual evidence finds that Latinos are not over-involved in drug- and gang-related violence.

The reality, Ousey and Kubrin argue, is that many immigrants are highly motivated to come to the United States to pursue economic and educational opportunities not available back home. They desperately want to build better lives, are willing to work hard, and defer short-term gratification in the interest of longer-term advancement. As a result, they are highly likely to avoid any opposition to mainstream norms or to the values of American society.

Immigration is often extremely arduous, requiring considerable planning and resources. Those who endeavor to make the journey are much less likely to suffer from criminal propensities. All the evidence, according to these authors, shows that rising immigration levels should in fact bolster the low-criminality segment of the U.S. population, leading to less crime over time.

Their study found that a one unit increase over time in the immigration index is associated with a decrease of 253 violent crimes per 100,000 persons in the U.S. Their study pooled 1980, 1990, and 2000 Census Bureau data on crime, immigration, and various demographic, economic, and social factors for 159 large U.S. cities, to assess the nature of the longitudinal relationship between immigration and violent crime.

Unlike the long-held popular view that immigration is a major contributor to higher crime rates, their results suggest the opposite: On average, cities that experienced increases in immigration from 1980 to 2000 also benefited from a decrease in violent crime rates. The authors conclude that their findings suggest that immigration in fact protects the U.S. from crime.

Ousey and Kubrin have published a more recent review of the latest generation (1994 to 2014) of immigration-crime research. Entitled, “Immigration and Crime: Assessing a Contentious Issue,” this review indicates that, overall, the immigration/crime association is a negative one, meaning that immigrants are associated with less crime compared to the local population.

Most findings included in the analysis, published in Annual Review of Criminology, which pooled results from 50 studies, showed no correlation between immigration and crime, but where effects existed, immigration was 2.5 times more likely to be linked to less crime than it was to be linked to more.

According to Lindzi Wessel, writing in Knowable magazine, Kubrin was inspired to investigate the link between immigration and crime by a famous study conducted in Chicago by sociologist Robert Sampson. He found lower rates of violence among predominantly Mexican-American communities containing many recent immigrants than in Chicago communities of African-Americans and whites. First- and second-generation immigrants in the Sampson study were, respectively, 45 percent and 22 percent less likely to commit violent crimes than third-generation Americans, he wrote.

All of this research suggests that any possible wall might not be so much keeping the criminals out. Instead, it could be locking them in.

Immigration isn’t linked to higher crime rates — but not everyone can believe it. Lindzi Wessel. Knowable Magazine 08.01.2018. www.knowablemagazine.org/article/society/2018/immigration-isnt-linked-higher-crime-rates-not-everyone-can-believe-it